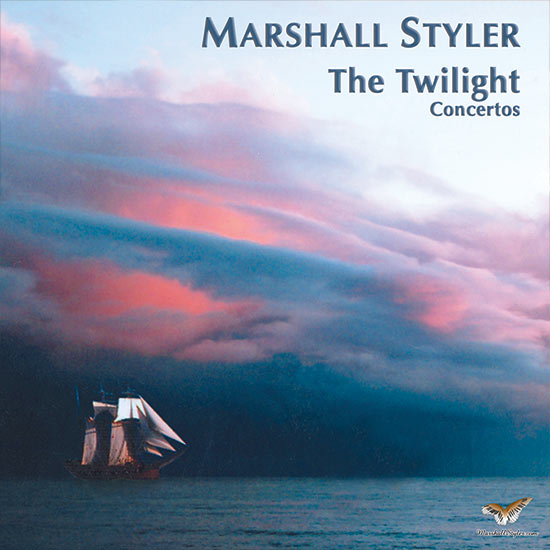 REVIEWS
"The Twilight Concertos" marked the beginning of a new stage for the artist, who thus has emerged from a dark period in his life. This is an album that transpires sensitivity from all its pores. Well wrapped into convincing arrangements and a perfect sonority, Marshall offers us in this occasion 10 themes, of a tremendously intimate nature, full of romantic melodies, typical of his style. They are pieces of a complex conception, yet at the same time they are easy to listen to. Of an impeccable make, this is a release that will surely be liked by a wide range of listeners. EDUARDO FONTANA (www.amazings.com)

Unabashedly romantic and filled with warm flowing melodies (which is understandable since the album celebrates the artist's wife being cancer-free for five years — bravo for that, by the way!), Marshall Styler's The Twilight Concertos is a delightful recording featuring piano mixed with both an assortment of orchestral synths and some classic new age music electronic sounds as well. Realize that all ten songs adhere to this formula (which is not to say that there isn't some variety here), and you will almost certainly enjoy the CD. Styler's exhibits solid command of his keyboard arsenal and his engineering/production quality is also good. In some ways, the songs are throwbacks to the simpler heart-on-your-sleeve period of new age music, and some of the particular keyboard embellishments add to that nostalgic feeling. As I've written in some past reviews, I personally love albums that elicit memories of the golden age of this genre, so you know I enjoyed this aspect of The Twilight Concertos.

Despite the word "concerto" in the album title, though, I don't necessarily consider the music here to be neo-classical, although I suppose if the piano was stripped of any accompaniment I might change my mind. However, since Styler frequently layers a minimum of two synths underneath the piano on every song, I think labeling it new age music is more accurate. The Twilight Concertos is closer to recordings from artists such as Shirley Cason, Ann Sweeten (not as somber though), Shannon Janssen, Kori Linae Carothers, or Agnus Dei (Gerald Krampl), than to those of, e.g., Nick Davis, whose recent music is clearly based on classical motifs.

"The Sun Behind The Moon Below" starts the album with twinkling bell tones, synth washes, new age keys, and a romantic piano melody. "Wedding in the Woods" has a strolling tempo to it, as well as more lush keyboards than the previous cut. Sampled pan pipes are used discretely to color the track with a sense of celebration. "Road To A Rock Enchanted," is more wistful, mixing piano with new age keys, and slowly building momentum and drama as it unfolds. Flute and subdued bass rhythms blend nicely with the layers of keys and piano. "When I Left The Genesee" is one of the quieter and more serene pieces on the CD, setting a reflective mood with new age keys and subtly applied synth strings alongside the piano. "Where The Roads Don't Go" opens in a somewhat melancholic vein, but later addition of sampled flute soaring above the bass rhythms and layers of keys lightens the mood from melancholy to a feeling of searching and journeying. The album concludes with the eight-plus minute long "Voyage of the Estrella Bello," clearly the most ambitious track on the album, a cinematic tone poem that accurately conveys the sensation of sailing the seas conveyed by rolling piano, undulating synths and gentle flow to the music.

While an undeniable sameness is present on many tracks, it's a positive element since this helps to sustain the overall mood of the CD. Also, Styler varies the assorted background textures and accompaniment enough to sustain listener interest and there is also enough variety in tempos and melody to compensate for the same lead synths and piano on many tracks.

One of my litmus tests for albums of this type is to play it during activity (in this case, raking and bagging leaves on a crisp fall day) and see if it "wears well." In the case of The Twilight Concertos, the music made the task easier and I was sorry to hear the album end (as there were still lots of leaves left on the ground). By that measure (as well as others), the CD was a hit with me and I believe it will be the same for lovers of romantic new age keyboard music. I solidly recommend it.