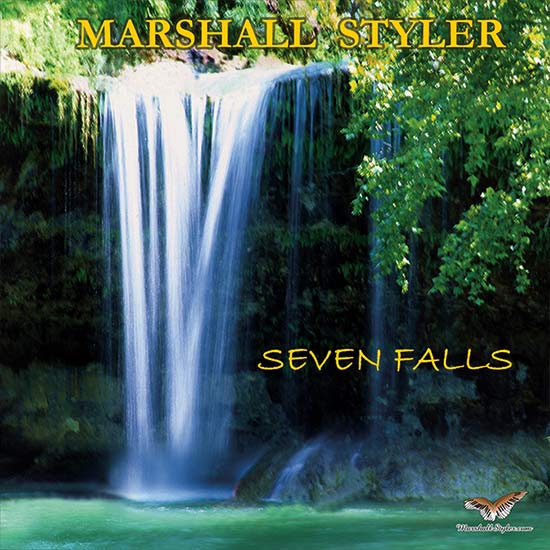 DOWNLOAD ALBUM (MP3 files): $10.00
We are now offereing the Download Version of Seven Falls. When purchasing at PayPal you can use a PayPal account or... simply enter your credit card information. No PayPal account needed. On your receipt page at PayPal click this "Return to Merchant" button to get to the download page

Seven Falls is Marshall Styler's seventh release, but is a first for me. The music was inspired by the special people and places in Styler's life, and the title comes from the Finger Lakes region (in New York) where his wife was from.

Styler performs his music on seven different keyboards, some of which are older and provide a warmer sound than some of the newer synths. Most of the melodies are played as piano, but they sound electronic to me, too - not a negative, just a little different sound from an acoustic piano. It's interesting because the newer keyboards are getting better at emulating other instruments, but some of the earlier keyboards had sounds that weren't supposed to be anything but interesting sounds. Styler's use of those sounds makes the music seem a little more vintage, but that isn't a negative point, either. Styler's "music is designed to relax, heal, and uplift the body, mind, and soul," so there are no sudden dynamic or tempo changes, making it also a good choice for reading, studying, and quiet background music.

"Flight of the Great Blue (South Padre Island)" begins the album with a quiet serenity and gentle sparkle. Flowing strings, a relaxed but free piano melody, and various ethereal sounds give an inviting indication of what's to come.

"All I Had to Hear You Say" is unabashedly romantic and tender. Warm string washes behind the piano and keyboards give the piece a contented glow. Greg Walker appears on guitars on "Camden to Monhegan," providing a nice contrast to the keyboards. "Welcome Back to Dreamland" is one of my favorites. A bit more melancholy than some of the other eight pieces, I like the dreamy, reflective feel of the piece. "Mandala (Mary's Waltz)" was inspired by the circular nature of the mandalas Styler's mother made from her own pressed and dried flowers - again very serene, tender, and contented.

The title track is a deeply emotional love song that floats on air. "One Day In One Heart" offers hope and reassurance as the angelic background voices soothe and calm. The closing piece, "Adirondack," is my favorite track. Somewhat more improvisational, the simplicity of the piece is very effective. The piano seems to meander at will while the background strings and ambient sounds keep it somewhat grounded. It's a beautiful way to close!